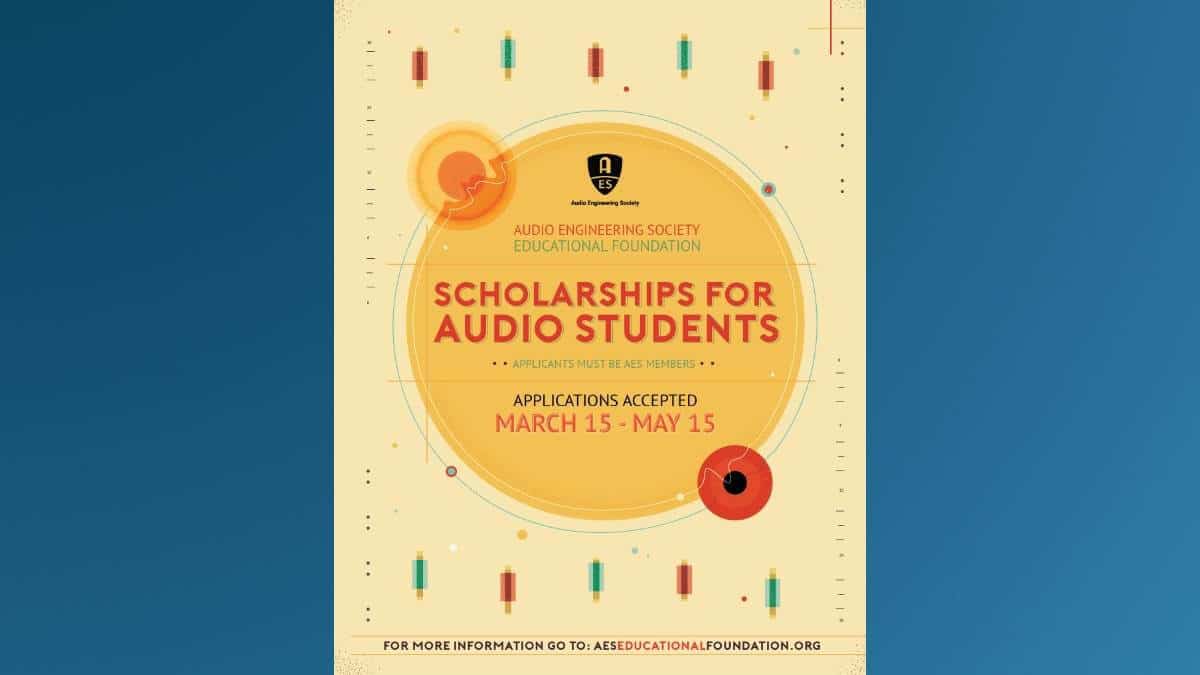 The AES Educational Foundation, dedicated to encouraging the entry of talented students into the profession of audio engineering, is accepting applications for the annual AESEF Graduate Studies Grants and Mary Lea Simpson Memorial Scholarship for undergraduate studies through May 15, 2022. Included in the opportunities for applicants to receive financial backing during their studies are scholarships honoring Larry Estrin, Ilpo Martikainen, Tom Kite and Bruce Swedien, as well as grant awards in memory of John Eargle and Emil Torick, all valuable industry contributors. Since its establishment in 1984, the Foundation has awarded grants for graduate studies to hundreds of exceptional applicants, many of whom have gone on to prominent and successful careers in the audio engineering industry.

This year’s offerings include:

Graduate Studies Scholarships:
Grants, including the named Scholarships, are awarded annually for exemplary students dedicated to the art and science of audio engineering. The AESEF Scholarship Committee selects the recipients of the memorial scholarships based on which student best meets the specification for each named scholarship.

Current grants include:
Genelec Mike Chafee Audio Pioneering Scholarship
The scholarship encourages passionate and outstanding women to continue their audio education while paying tribute to noted long-time Genelec manufacturer’s representative, audiophile, sound designer, acoustician, audio evangelist and supporter of women in audio, Michael Chafee. Chafee had been involved with Genelec since 1996 and is credited with being an early pioneer and key influencer in promoting the concept of Active Monitoring technology to the market.

The John Eargle Award
This award honors AES Past-President and Fellow, John Eargle, who authored several seminal textbooks on audio, as well as engineering more than 250 albums, and was posthumously awarded a Technical GRAMMY Award in 2008. This scholarship is given annually to a student who excels in both technology and music.

Larry Estrin Scholarship
This grant honors the legacy of Laurence H. “Larry” Estrin, a respected pro audio industry innovator who introduced numerous engineering advancements in wireless RF technology, broadcast production and live sound. This grant is offered to students with a demonstrated commitment to audio engineering in the broadcast Industry.

L-Acoustics Dr. Christian Heil Future of Sound Scholarship
This scholarship awards recipients who demonstrate curiosity and dedication to shaping the future of sound, including approaches that may question conventions or call upon bodies of scientific knowledge outside of the realm of audio. Students having pursued an undergraduate course of study in an area other than audio are encouraged to apply in the interest of enriching cross-disciplinary thinking and exchanges to further the state of the art.

Advancing Audio – The Tom Kite Scholarship
This scholarship honors Kite’s legacy of dedication to engineering excellence in audio and audio measurement, as well as his achievements within the AES and as Vice President of Engineering of Audio Precision, the scholarship’s sponsor. The scholarship is offered to students who demonstrate creativity and imagination.

Genelec Dr. Ilpo Martikainen Audio Visionary Scholarship
Coinciding with its 40th anniversary in 2018, Genelec announced the creation of a scholarship honoring its innovative and entrepreneurial founder. The Genelec Dr. Ilpo Martikainen Audio Visionary Scholarship is offered annually to U.S. graduate students in the field of audio engineering who are members of the Audio Engineering Society and have a passion for advancing audio through innovation and technology development.

Bruce Swedien Scholarship Fund
This fund was established as a way to say “thank you” for Swedien’s many celebrated contributions to the industry and to help aid young recording engineers who believe in putting the “Music First!”, as is his mantra.

The Emil Torick Award
This scholarship, awarded annually to an outstanding student with exceptional career goals, honors the former long-term AES Foundation President and founding member. Torick held 16 patents and authored more than 60 technical publications. He served on the National Radio Systems Committee and was a member of the U.S. delegation to the International Radio Consultative Committee in Geneva.

For Undergraduates:
The Mary Lea Simpson Memorial Scholarship
This scholarship of full tuition for final year of studies is being offered to an undergraduate student entering senior year at a North American college or university Audio Engineering/Recording Arts Program. The scholarship honors Mary Lea Simpson, who was a graduate of the Audio Production Program at New England Institute of Art when she died tragically in 2013 in a building collapse.

Grants have been made possible by contributions from AES, Audio Precision, Dolby, Genelec, Harman International, JBL, L-Acoustics, the estate of John K. Hilliard, the Mix Foundation for Excellence in Audio, the families of John Eargle, Mary Lea Simpson, David Smith, Emil Torick, and the family and friends of Larry Estrin, Don and Fran Pearson, and Bruce Swedien. The AESEF also receives support from other benefactors such as in-memoriam donors and individuals and companies that support education in audio.