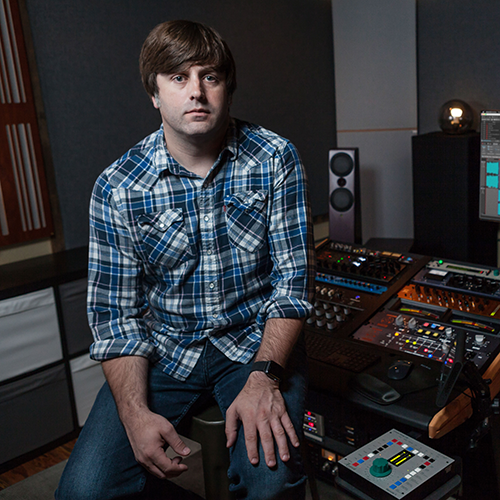 Justin is a mastering engineer based in Madison, Wisconsin who has worked on remastering projects for The Replacements, Ol’ Dirty Bastard, Busta Rhymes, En Vogue, and mastering projects for Michael Franti & Spearhead, North Mississippi Allstars, G. Love, Tommy Stinson, The Gaslight Anthem, Beach Bunny Anberlin, Screeching Weasel, and thousands of other independent bands and artists around the world. Before transitioning to mastering full-time he also spent time at Butch Vig’s Smart Studios in Madison Wisconsin recording and mixing a number of projects, and has been working full-time in the audio field for nearly 20 years. His studio Mystery Room Mastering has been in business since 2009. Growing up and playing in bands in the midwest is what helped Justin formulate a career in audio and ultimately led to playing bass for a time in the band Screeching Weasel, as well as playing bass for Tommy Stinson’s solo shows, and the relaunch of Tommy Stinson’s post-Replacements band called Bash & Pop who released a new album in 2017 on Fat Possum Records and performed on The Late Show with Stephen Colbert. Aside from mastering tons of singles, EPs, and albums, Justin also masters nearly all the content for The License Lab which is a library music company based in Milwaukee Wisconsin, and recently started doing a monthly livestream for Steinberg Media to help both new and current users of WaveLab Pro get a better understanding of how to use it. Justin has also written a number of articles for the popular website The Pro Audio Files on the topic mastering, preparing for mastering, and an overview of what types of master files you may need for various release formats.